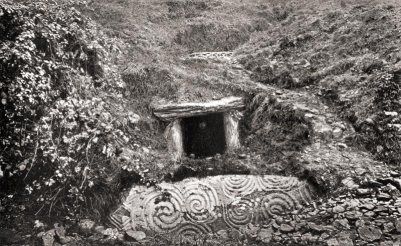 Some people in Ireland start their Christmas celebrations with an ancient pagan ceremony – if they can get tickets!

Over five thousand years ago the inhabitants of the Boyne Valley in modern County Meath built a great passage tomb to contain the bones of their ancestors.  Curiously the remains of just five individuals were found inside the burial chamber when it was excavated by Professor Michael J Kelly in the 1960s.  Perhaps these individuals were especially significant to the community that built Newgrange and the mound was actually a temple to the ancestors. During the excavation, Kelly and his team made a bizarre discovery. There was an unusual ‘window’ over the entrance to the tomb and they speculated what its purpose was.  Suspicion fell on the alignment of the ‘window,’ or lightbox, as it is now called.  It seemed to be facing the direction of sunrise on the winter solstice.  There really was only one way to test it….. 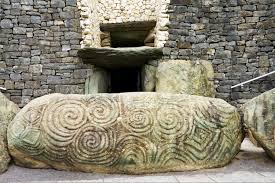 The reconstructed entrance to Newgrange, with the lightbox above the doorway. The superbly carved stone can be seen in the previous image from the 1880s.

On December 21st 1967, Professor Kelly and some colleagues were the first people in modern times to witness the sunlight enter the lightbox and illuminate the entire interior of the tomb right to the very back of the passage.  The whole event lasted just seventeen minutes but it confirmed the extraordinary skills available in Ireland five thousand years ago.  More recently it has been noted that the Newgrange alignment with the solstice sunrise appears to be more precise than similar alignments elsewhere, such as at Maes Howe in the Orkney Islands.  Our ancestors valued this moment because it marked the turning point of the year and the assurance that spring was not far off.

A five thousand year old phenomenon restored – the light entering the passage at Newgrange at sunrise on the winter solstice.

Clearly our ancestors valued the winter solstice.  The reason is not difficult to discern – they were farmers and the solstice marked the point of the year when the sun stopped slipping further and further down towards the southern horizon with each passing day.  It would now begin to climb higher in the sky.  This heralded the promise of spring and the new season for planting crops. Today the winter solstice in Ireland gives us a bare seven and a half hours of daylight!  So the increasing brightness and (hopefully) warmth of the sun is still a welcome sight.

Today, if you are lucky, you can enter a lottery to obtain tickets from the Office of Public Works Heritage Service to enter the passage at Newgrange before sunrise on 21st December and wait expectantly for the eerie and spectacular event.  The space inside the passage is very limited so only a small number of people are admitted on the winter solstice.

Back when it was built, the light entered the lightbox at Newgrange at exactly sunrise, but today, because of a wobble in the earth’s axis (called precession), the sunlight enters about four minutes after sunrise.  The whole phenomenon is fraught because the weather in Ireland does not always guarantee a clear sunny morning – cloud does obscure the whole sky in some years.  However the phenomenon is so popular that large crowds gather outside the mound to witness the sunrise.  When you live this far north of the Equator, the assurance that the sun has stopped sliding towards the southern horizon is something we look forward to!  The Newgrange experience is now part of the run-up to Christmas for many people in twenty-first century Ireland.