The latest public lecture in Midleton Library will be a survey of the history of the Fitzgeralds of Imokilly from 1177 to the early 20th century.

It will cover the early Fitzgeralds in Imokilly to the 1280s, the intervention of the 4th Earl of Desmond in the 1300s, and arrival of Sir Maurice Fitzgerald. Knight of Kerry, before 1400 followed by the arrival of his sons in the decades following. The Seneschals of Imokilly have a starring role as does the Elizabethan loyalist Dean of Cloyne, Sir John FitzEdmund Fitzgerald of Ballymaloe. The lecture will then follow the fortunes of the Fitzgeralds of Ballycrenane and of Corkbeg – the latter being the last of the Fitzgeralds descended from Sir Maurice to have kept their estates in the area.

It’s free and all are welcome! 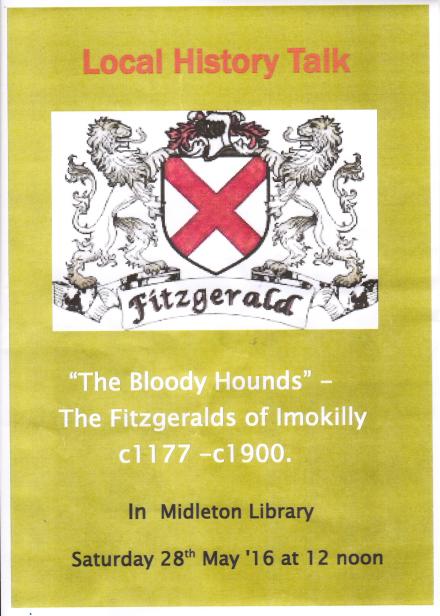 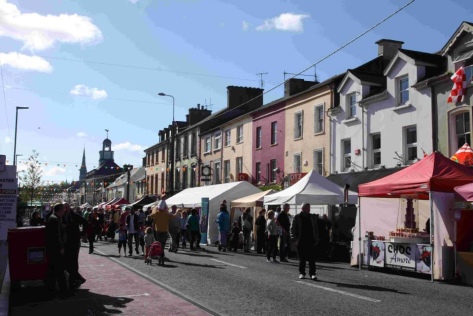 The broad and straight Main Street in Midleton was originally designed as a market place – and with the Food and Drink Festival in September, it reverts to this function.

Does anyone know how to clone a human being? I fear I may have to subject myself to the procedure this month. Tomorrow, Saturday 12th Sept, Midleton celebrates its annual Food and Drink Festival. The whole Main Street from the Courthouse to Brodrick Street will be closed off for the festival, which will spill over into Connolly Street. The festival actually started on Friday 4th September with Fishy Friday – an appropriate celebration of Midleton’s proximity to the sea and the fishing port of Ballycotton.  Wednesday 9th Sept saw the official launch banquet with a medieval feast in the Jameson Heritage Center. Tomorrow’s street festival is the main event.

What I suspect is that most visitors will not be aware that Midleton had a good reputation for produce as early as 1750. In that year, Dr Charles Smith published The Ancient and Present state of the County and City of Cork. This survey of the county included the remark that Midleton (or Middleton, as he wrote it) possessed a good market for flesh and fish. The remark was interesting in that it almost certainly reflected the reputation of the town’s produce at the time. Alas, in keeping with the eighteenth century tradition of emphasizing the importance of meat and fish, Smith does not discuss the vegetable produce of the town. One would give much to know what people thought of the local vegetables and fruit at the time.

The earliest list of grocers and food shops in Midleton dates from 1824 (Pigot’s Directory). One gets the impression that the listing may be incomplete. It lists just three bakers, two butchers, a couple of grocers….and eight or nine spirit dealers, which gives an idea of the priorities. There was one distillery (Hackett’s) in 1824. Market day was, of course, on Saturday and there were four fairs during the year. 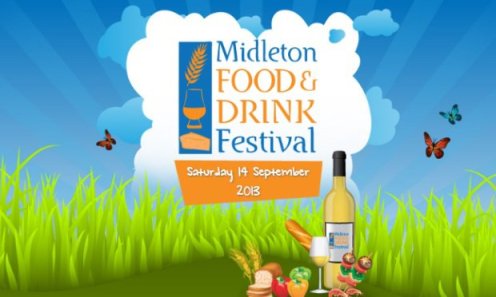 These changes reflected the changing economy of Midleton from 1824 until 1881. The directories also show how the railway completed in 1859 had a major effect on the shopping habits of the people with more imports being made more readily available.

Midleton’s modern obsession with good food can be traced to Myrtle Allen. The doyenne of modern Irish cuisine opened a restaurant in the dining room of her home, Ballymaloe House in 1964. Myrtle had the bizarre notion of serving food produced locally and in season instead of relying on imported, and out of season, ingredients. Nowadays this is considered to be a standard policy in the best restaurants. With cookery courses being launched a couple of years later, Myrtle and Darina O’Connell (now Darina Allen) have had an enormous influence on the Irish restaurant trade. But it went further than that – they also had a huge impact on Irish artisan food producers, making the Ballymaloe effect even more important in the whole world of Irish food.  A very good reason to celebrate good food and drink during the harvest season in Midleton..