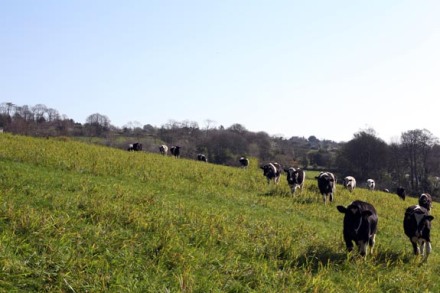 Cattle posing for a photo in the East Cork countryside.  The English word townland was created to replace the Irish word baile bo which refers to a piece of land that can support a herd of cattle.

When the Cromwellian conquest of Ireland was completed in the early 1650s, the country lay in ruins – plague, famine and war had decimated the population.  The calamity was even worse than the disaster of the Great Famine in the 1840s.  In a deeply pious age, it really must have seemed as if the four horsemen of the Apocalypse had simply run amok.  But one more disaster awaited those Catholics who actually owned land – confiscation and transplantation.

The Commonwealth or Cromwellian government had to pay off those soldiers who had fought in its armies, and also pay off those wealthy merchants and landed gentry who had ‘adventured’ money to pay for the conquest of Ireland.  Back then there were very few sophisticated financial instruments the government could use to raise the money to do this.  But there was one outstanding resource that could stand in for money – land.  By confiscating the land of rebellious Irish Catholics, the Commonwealth could release a huge amount of land for paying off the Adventurers and soldiers.

But once the Catholic landowners were dispossessed and forced to migrate to the western province of Connacht, the government faced a difficulty – how to accurately quantify the amount of land released under the scheme?  There were no accurate maps of each of the localities to the granted to the Adventurers and soldiers.  Eventually, after some delays and difficulties, the ambitious surgeon-general of the English army, William Petty, stepped in and offered to survey the whole area to be confiscated.  He achieved this in barely three years (1655-1658)!  The end result was that Ireland was the first country to be accurately measured and mapped in its entirety according to the modern mapping techniques then available.  It also allowed Petty to publish the first truly accurate map of the whole of Ireland in 1685.

What has all this got to do with Irish townlands?  Well, when Petty’s surveyors examined the country they used the townland as the basic unit of territorial division.  This can be seen in the parish maps that were produced by the survey – each parish was made up of several townlands. These parish maps were the basis of the barony maps, which, in turn, led to the creation of county maps, thence the provincial maps and finally the General Mapp of Ireland.

By using the townland as the basic territorial unit, Petty made himself the godfather of the modern Irish townland.  Virtually all the townlands identified by Petty’s surveyors still exist, but new ones were also created later, usually by subdividing large townlands, or cutting a chunk out of an existing townland.  A classic example of the latter is the townland of School-Land in Midleton.  Cut out of the townland of Townparks, it represents the land given by the Brodrick family to the Elizabeth Villiers, Countess of Orkney, to persuade her to establish her intended new school in Midleton – it’s now called Midleton College (a boarding and day secondary school).  Why do this? The 1670 charter of King Charles II gave the Corporation (town council) of Midleton authority over a number of townlands (Townparks, Castleredmond, etc), but the charter didn’t mention the townland of School-Land, because it didn’t come into being until 1696, when the school was founded!   The new townland allowed the school to exist and function outside the jurisdiction of the Corporation – although it was represented on the board of governors.

Another example is Dromadda East townland near the village of Ladysbridge.  This is shown on the first edition six-inch Ordnance Survey map as consisting of just eight acres, three roods and thirty perches (8a 3r 30p) laid out in four exactly rectangular fields.  However this townland does not appear on the Down Survey maps because it was clearly separated from the townland of Dromaddabeg several years after Petty’s men surveyed the area.  Its creation must have come about through a sale of the land to a different owner.

William Petty’s use of townlands as the basic territorial unit meant that the earlier smaller territorial units were effectively lost, so today, the townland is the basic building block of of all Irish territorial divisions.  According to Thomas Larcom, first director of the Ordnance Survey of Ireland, the building blocks of Irish territorial divisions included such land measurements as the gneeve (approximately 10 acres, depending on the quality of the land), the sessiagh (c.20 acres approx.) consisting of two gneeves, a varying number of sessiaghs or gneeves made up a ballyboe or tate or townland, depending on the productive quality of the land.  Today there are 61,096 townlands in Ireland (north and south) of which 60, 679 are inhabited (2011).  Everyone in Ireland, whether they realize it or not, lives in a townland.  No wonder we didn’t need postcodes!

One thought on “Townlands – the basic unit of Irish local identity.”